For more information on how to install and use the kit refer to the documentation.

Developing spacecraft flight software (FSW) is a complex and challenging task. There is a wide range of embedded processor boards available to host the FSW and several parameters including size, weight, power, cost, and software support that drive the selection. The cFS Platform Abstraction layer defines two Application Programmer Interfaces (APIs) that isolate the cFE from the processor and operating system implementation details. As a result, the same cFE and application source code can run on different processor/OS platforms unlike the mobile phone industry that requires separate application development efforts for each platform. In addition to the obvious benefit of application reusability across missions, this architecture pr ovides an application path-to-flight from a desktop technology demonstration environment to aerial and space platforms.

Just as with a user’s mobile phone, applications provide the majority of a mission’s functionality. A typical spacecraft FSW system may have 20 to 30 applications regardless of whether it is a CubeSat or a “great observatory”. NASA released a suite of applications that provide functions common to most spacecraft. These applications evolved over many missions incorporating lessons learned over the entire spacecraft/FSW lifecycle including spacecraft integration & test, operations, and in-orbit maintenance. As a result, they are extremely reliable and they provide functionality that may not be obvious to engineers and scientist new to space systems.

NASA provides the cFS Framework, development tools, and specifications to facilitate a user community that can extend the framework with additional platform abstractions, applications, and tools. This model allows the cFS community to develop innovative solutions that are responsive to the challenges of today’s aerospace industry including universities developing CubeSats, the commercialization of near-Earth space, and NASA’s Lunar Orbiting Platform-Gateway open architecture that includes the cFS.

A NASA multi-center configuration control board (CCB) maintains the cFS Framework. The cFS Framework will include specifications that allow Component Suppliers to develop and publish components: applications, platforms, and tools. OSK is an open source cFS distribution that includes the cFS, COSMOS, and 42.

The NASA Goddard Space Flight Center (GSFC) initially developed the cFS over many years based on a rich heritage of successful missions. The cFS components were incrementally developed and publically released. The core Flight Executive (cFE) including the platform abstraction layer were first used on the Lunar Reconnaissance Orbiter (LRO) launched in 2009 and the initial suite of cFS applications was first used on the Global Precipitation Measurement (GPM) spacecraft launched in 2014. In January 2015, NASA released the entire cFS software suite as open source under the NASA Open Source Agreement (NOSA). 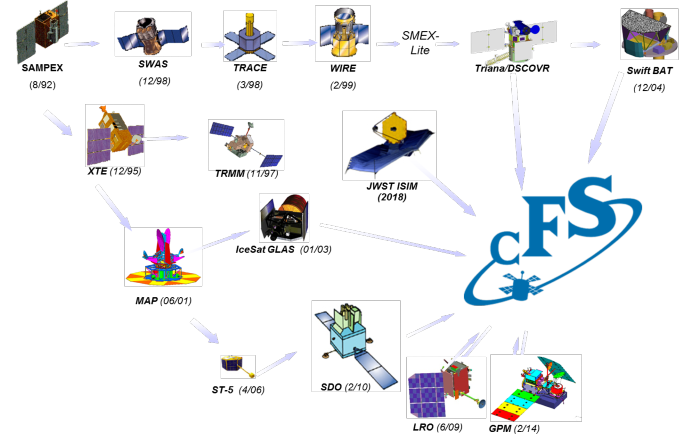 Although the cFS was incrementally developed and released, the initial effort started with a team of senior engineers that performed a structured heritage analysis of missions covering more than a decade. The diversity of the heritage missions (single vs. redundant components, varying orbits, different operational communication scenarios, etc.) provided valuable insights into what drove FSW commonality and variability across the missions. The team considered the entire FSW lifecycle including in-orbit FSW sustaining engineering, as they performed their analysis. They identified system and application level variation points to address the range and scope of the flight systems domain. A primary goal was to enable portability across embedded computing platforms and to implement different end-user functional needs without the need to modify the source code.

The “engineering V” shown below highlights the cFS lifecycle artifacts. The FSW subsystem and detailed requirements are parametrized to support mission tailoring. The FSW source code uses compile-time and run-time configuration parameters to customize the source code. The cFS unit test use the configuration parameters, but they are not design to test all permutations of the configuration options. The build test include the FSW headers files so the test adapt to the mission customizations. The build test procedures run on the ASIST ground system. If you are not using ASIST then they can serve as test design references. The cFS does not include integration or system tests. 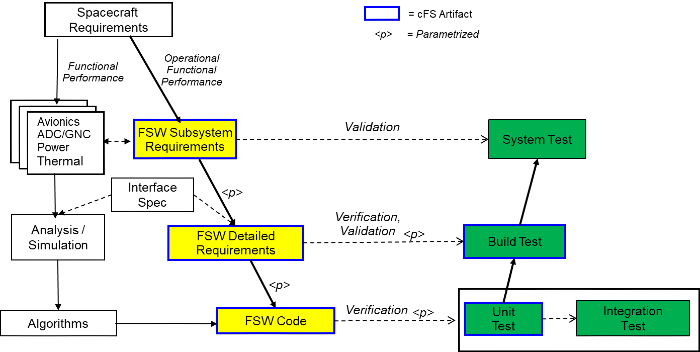